7 Facts About Advertising Contests in the « Mad Men » Era An ad for Dr Pepper’s « Win Time of Your Life » contest (image: www.goantiques.com)

Co-creation, the eYeka way, already existed in the 1950’s! That’s what I found out recently, reading Julia Kirby’s Creative That Cracks the Code article in the Harvard Business Review. « It’s easy to forget how long companies have been inviting ideas from ‘the crowd, » Julia Kirby explains, « if you’re in doubt, read The Prize Winner of Defiance, Ohio, a memoir of 1950’s America in which the author’s mother writes advertising jingles for contest after contest. »

It seems that Jeff Howe didn’t actually coin the term, but popularized it in his Wired article and book. As I didn’t know about these advertising contests, I thought it would be interesting to learn more about them, so I read The Prize Winner of Defiance, Ohio. I found out that during the so-called « Contest Era » in the 1950s and 1960s, a lot of brands organized contests to advertise and sell their products. The book is a rare testimonial about this form of advertising, that we know today as creative crowdsourcing. Here are 7 facts about advertising contests and consumer creativity… half-a-century ago.

The Prize Winner of Defiance, Ohio tells the story of Evelyn Ryan, a mother of 10 (the book was written by her daughter, Terry Ryan), who loved participating in advertising contests. By winning both small and (sometimes) big prizes, she kept her family afloat during the « Contest Era » of the 1950s and 1960s. Were these advertising contests an early form of crowdsourcing? Or is crowdsourcing just the current word for today’s advertising contests? Either way, the point is that the book offers rare insights into marketing and consumer creativity five decades ago. Here are 10 facts about Advertising Contests in the Mad Men Era:

Contesting was big business, for both sponsors and winners. Entrants felt almost patrtiotic to be part of it (p. 23)

The 1950s were years of prosperity in the United States: the economy grew by 37%, and at the end of the decade, the median American family had 30% more purchasing power than at the beginning of the decade. During two decades, the American Way of Life was a symbol of freedom and happiness, expressed by abundance and massive consumption. One of the big weapons in advertisers’ arsenal was the organization of contests in newspapers and magazines.

Contesting was so big that there were even specialized publications, like the semimonthly Contest Magazine and bimonthly Contest Worksheet, that published upcoming contests, rules, deadlines, provided hints and showcased winning entries from other contest participants. Subscribing to these publications was very useful for the likes of Evelyn Ryan, but it was not always accepted by the contest organizers. At an interview with Evelyn’s son Bruce, a company representative indeed asked him…

Bruce, do you subscribe to contest publications that write the contest entries for you? (p. 175)

He replied no, and they won the prize. Evelyn Ryan submitted a lot of entries to various advertising contests, often under different names and sometimes on behalf of her children, and regularly won prizes. With an alcoholic husband who spent part of his salary on beer and liquor, these extra earnings proved to be vital for survival.

The contests Mom entered required word skills, wit, and originality. […] An average contest might ask for a rhymed jingle, the last line of a five-line limerick, or 25 words or less on a specific product (p. 22)

Some of these contests were naming contests, others were idea contest and others were jingle contests, where consumers were asked to complete a predefined set of phrases in a limited number of words. Participants were required to contribute with original, creative submissions, not just to send in coupons that would be drawn out from a bowl. An example was the Burma Shave roadside rhymes, which were often created by consumers who participated in Burma Shave contests: 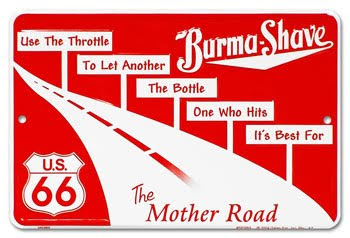 In the 1950’s, the Burma-Shave roadside billboard campaigns consisted of 6 signs placed at 100 yards intervals, with the last always « Burma Shave »

Participants usually sent in their entries via mail, written on the entry forms ripped out of the newspaper. For obvious reasons, there were no video or even photo contests at that time, because the devices were still expensive, not widespread and few people could use them as well as today. The most convenient way to get consumers to participate at the time was to ask them to create in written form.

They expect entrants to play with words and make plays on words. That’s what contesting is all about (p. 188)

Companies sponsored contests for two reasons: to acquire new advertising ideas from the public, and to sell more products (p. 22)

Chevrolet, Colgate, Dial, Dole, Dr Pepper, Heinz, Kleenex, Kraft Foods, Lipton, Lucky Strike, Purina, Quaker Oats… All these brands are cited in the book, organizing a variety of contests in which Evelyn Ryan participated, and sometimes won. To participate, contestants had to send in a proof of purchase along with their entry. This is different from today’s crowdsourcing contests where participants don’t have to be clients or consumers, and very often they aren’t! An example from the book is a contest sponsored by Paper Mate: The only reason these companies sponsor contests is to get us to buy whatever it is they’re selling. You’d better […] buy a Paper Mate (p. 231)

Mom’s recent wins didn’t translate to cash in hand, like the basketball she won from the Colgate toothpaste contest (p. 165)

In the advertising contests of the 1950s and 1960s, participation was always incentivized with prizes. These could be everything from small cash prizes (Evelyn Ryan won $10 at a contest sponsored by Nabisco, $10 at another contest for Dial soap) to exuberant rewards like a functioning producing oil well, publicly traded stocks or the participants’ weight in gold!

Evelyn Ryan filled her house with useful prizes such as household appliances, but because she needed money to pay her bills, she often asked for the cash equivalent. When the companies could not, or would not, pay her the prize value in cash, she accepted the original prizes and sold them herself (like the yellow Triumph sports car cited in the book).

The last contest that she won got her a trip to Switzerland, a brand new Ford Mustang, two gold watches and $3,440.64 in cash (there you go, I spoiled it!). Again, she sold most of it to pay her bills and her kids’ education.

5 – Advertising Contests Were Handled by Agencies

Mom held up her hand to stop us from erupting until she confirmed the detail with Young & Rubicam (p. 176)

Brands did not initiate and handle contests themselves, they commissioned advertising agencies. Setting up the contests, advertising them in the media, dealing with the entries, organizing the judging, distributing the prizes… most of it was handled by specialized promotion agencies. The book mentions three agencies that still exist today: D.L. Blair, Donnelley and Young&Rubicam. A very interesting fact is that contestants adapted their entries to these different agencies: D.L. Blair preferred « humorous, witty entries » and Donnelley were more receptive to « honest-sounding, straightforward entries, » the book reveals.

The advertising agency hired by the sponsoring company to judge the contest was always a more important consideration for entrants than the sponsor or the product (p. 25)

This is somewhat different from today, where advertising agencies and/or crowdsourcing platforms don’t play a major role in judging. Entries are often assessed by an expert jury or the client who commissioned the project. Serial participants like Evelyn knew what specific agencies liked and disliked, and when she lost a contest judged by Donnelley, her contesting friend Dortha had a rational explanation:

6 – Consumers Participated to Express Their Creativity

Today, we have a fairly good idea of participants’ motivations in co-creation projects (see here, here or here). But what about the motivations from the contest participants in the 1950s and 1960s? Again, the book gives us some valuable insights. About her mother, Terry Ryan explains that:

My mother loved writing and was often torn between that love [of contesting] and household responsibilities (p. 113)

Evelyn Ryan was a busy housewife, but she was also a passionate writer. She started her career as a columnist for a small local newspaper, and always loved to express herself creatively, but her family life (and mindsets in the 1950s) hindered her from working for herself and starting a career. Contesting allowed her to use her creative talent. Despite a busy daily life she managed to create entries and submit them to various contests.

Writing entries distracted my mother from bad news, and it was Mom’s way of putting her brain to work at something productive – something she felt contributed positive energy to the world (p. 241)

7 – The Contest Era Ended Because of Sweepstakes

Contests of word skill […] were beginning to loose ground to sweepstakes, which required nothing more than being lucky enough to have your name picked out of a hat (p. 300)

As popular as advertising contests were during these two decades, it is surprising that they vanished in the following years. According to the book, contests disappeared because of sweepstakes, another form of sales promotion in which participants submit free entries into drawings of chance. Sweepstakes were much easier, and probably cheaper, to organize for companies.

I can understand why companies are starting to prefer sweepstakes – it’s a lot easier to pick the winners. […] The sponsors are saying that judges are too slow and expensive (p. 300)

…said Dortha, one of Evelyn Ryan’s contesting friends, in the book. Is it the only reason why advertising contests disappeared in the early 1970s? It makes sense that sweepstakes might have produced better returns as they are easier to organize, « judge » and participate in. But contests had not totally disappeared. The Pillsbury Bake-Off cooking contest, for example, started in 1949 and ran strong for most of the coming decades. Pillsbury’s Bake-Off is one of the few contests that survived the advent of sweepstakes (image via http://generalmills.com)

These 7 facts about advertising contests in the « Mad Men » era show that the principle of organizing creative contests is not new in marketing. Today, the phenomenon has just been taken to a whole new level with the possibilities offered by social media and crowdsourcing platforms like eYeka. With the use of online co-creation booming in the last decade, we can safely say that we are in a new golden era for creative advertising contests and that brands will continue to leverage crowds in new ways not possible during the Mad Men Era.

See for yourself what brands can achieve on the world’s largest creative playground!

Yannig was Marketing Manager at eYeka, responsible for PR, communication and research. Interested in marketing, innovation and design-related topics, he also loves to free his head by cycling, running, reading or drawing. Yannig, who holds an MSc from ESSCA School of Management and a PhD from University Paris 1 Panthéon-Sorbonne, tweets under @YannigRoth and blogs at www.yannigroth.com
View all posts by Yannig →
This entry was posted in What a participative world and tagged advertising, consumer, consumer creativity, contests, creativity, crowdsourcing, film, marketing. Bookmark the permalink.